If you are waiting for a President, Congress, Governor Shumlin or our sitting VT legislators to fix all of our growing political and economic problems, to restore our freedoms and livelihoods, you will still be waiting when hell freezes over.

We have got to fix the situation ourselves, with grit and courage.

There is a simple and dramatic way to get real change in Vermont and from here to change the Nation:

The Vermont Thirty is a coalition of Independent candidates, running together for ALL 30 SEATS in the VT Senate. –Retire the entire sitting Senate!– The Senate will be full of US!

And remember this: A majority of the VT Senate can say NO to anything a governor or the President or the Congress wants to shove down our throats. That “NO” includes NO to higher taxes, oppressive regulation, borrowing, debt, corporate power, austerity, Agenda 21 and other restrictions on freedom and opportunity… And we will find a way to stand against these brutal wars, occupations and rapid centralization. Small is beautiful. And effective.

Just say yes, and we’ll all say “no” together, and make our “no” stick.

Say “yes”, to a new life for business, farms, and attractive opportunities for our children to make a life in Vermont. Yes, to local solutions and THE POWER OF YOU in your Legislature and your town….Yes to that kind of Revolution in Vermont this year!

And since such a thing as 30 INDEPENDENT CANDIDATES RUNNING FOR EVERY SEAT in a state Senate has never been done before… we will be noticed and written about by the press, both here in VT and nationally. And our run will catch fire! And the people will rise with us.

Join us! We will have fun while we say what needs saying and then do what needs doing. Let us pledge ourselves to being politically “outragious” because BOREDOM IS DEATH. So is fear.

Governors and Presidents do not make laws or vote on laws. Only legislators do that. (So now you understand why corporate criminals have focused on buying up Congress and our legislatures for so long.) Our congressional delegation utters platitudes about ending the wars, and then all three vote for continued funding of those wars. Politics 101.

To break the corporate hold on us, WE THE PEOPLE WILL BECOME THE VERMONT SENATE. Then you will see if the VT House, the Governor, Congress or the corporations and their lobbyists can keep us down. They cannot! Join us. Run with us at them all.

Vermonters for Liberty will provide support and resources for viable, electable local Liberty Candidates who are serious about winning this coming election. Talk about where you stand. More details as the campaigns unfold. In 2012, you will not be alone!

Your declared candidacy includes the following:

What you have to do

The government is, or ought to be, instituted for the common benefit, protection and security of the people, nation, or community, and not for the particular emolument or advantage of any single person, family, or set of persons… that the community hath an indubitable, unalienable and indefeasible right, to reform or alter government, in such manner as shall be, by that community, judge most conducive to the public weal. 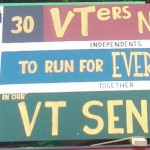 The Independence Parades in Montpelier and Warren this past weekend saw the unleashing of the Vermont 30: the Independent electoral challenge to retake the Vermont Senate for the people of Vermont in 2012.

For more information go to the Vermont Alliance for Local Action at VTALA.net!

Hundreds of these flyers were distributed in Warren & Montpelier.

Although Vermont’s Independence Day is January 15th, this coming Saturday, we will be celebrating at the Big Picture the following Saturday, January 29th at 8PM. Come one, come all for a fabulous and fascinating evening in the Mad River Valley!

The Big Picture theatre is located at 48 CARROL ROAD – WAITSFIELD, VT / OFF ROUTE 100. Click here for map and directions.

Click the picture below and a printable poster* will open in a new window.